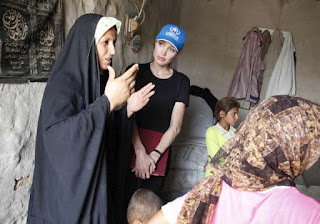 Goodwill Ambassador as defined in Wikipedia

A volunteer editor at Wikipedia had extended the Goodwill Ambassador article there, here is the article please feel free to cite it in your work, this copy was provided yesterday by the original editor, she asked us to post it because Wikipedia is always subject to change.

Goodwill ambassador is a collective term sometimes used as a substitute honorific title or a title of honor for an Ambassador of Goodwill; but most appropriately for a generic recognition it is job position or description that is usually indicated following the name of the individual recognized in the position. Goodwill ambassadors generally deliver goodwill or promote ideals from one entity to another or a population.

A goodwill ambassador may be an individual from a single country who resides or travels to another country in a diplomatic mission or international friendship mission, at a peer to peer level; that is, country to country, state to state, city to city, or as an intermediary representing the people at the other extreme or an organization.

Goodwill Ambassadors have been an unofficial and official part of government and culture as long as diplomacy itself to exchange gifts and present humanitarian relief or development aid using well known celebrities, scientists, authors, known activists, and other high society figures. Goodwill missions of state are usually carried out or overseen by the head of state and does not necessarily involve diplomatic credentials outside of a letter of presentation or credence, however some states do issue credentials that include diplomatic immunity for their goodwill ambassadors such as Haiti.

Many governmental, multilateral, nongovernmental, and nonprofit organizations utilize goodwill ambassadors to promote their programs and reach out to others with programs that are based on good relations that are usually secular and apolitical. Among the organizations that use goodwill ambassadors to deliver agendas include Sister Cities, the United Nations, organizations of the United Nations, the African Union, Muscular Dystrophy Association, Rotary International, and many others including the government of the United States of America as seen in August when former President Bill Clinton traveled to North Korea on a special goodwill mission.


Alternatively, Websters Online Dictionary presents a specialty definition for a goodwill ambassador as one that promotes goodwill and solicits trade for local business firms who are members of parent organization: Develops list of prospective clients from such sources as newspaper items, utility companies' records, and local merchants. Visits homes of new residents, prospective parents, recently married couples, engaged persons, and other prospects to explain and sell services available from local merchants. Usually presents token gifts or gift certificates to induce clients to use local services or purchase local merchandise. Prepares reports of services rendered and visits made for parent organization and member firms. May solicit new organization membership. May explain community services available. May organize clubs and plan parties for new residents.

Angelina Jolie is a member of the United Nations Goodwill Ambassador Corps, a collaborator at the Goodwill Embassy website and Goodwill Ambassadors of the World Facebook page serving as a social media spokesperson, she is also the most famous goodwill ambassador at this very moment and has brought the ideal back to the world. Beginning in October or early November our technology will permit cross platform interaction with Goodwill Ambassadors and World Leaders Coalition through Globcal International. To receive a reminder follow our blog here using Networked Blogs or follow us using Google.